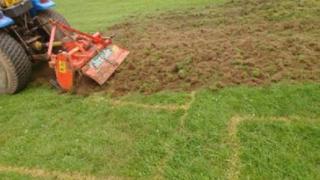 Police are treating a “White Lives Matter” slogan, which was created on a park hillside, as a hate crime.

The message in Miners Welfare Park in Bedworth is being handled as racially-aggravated felony harm.

“This seems to be a transparent try to stir group tensions and it’ll not be tolerated,” Supt Daf Goddard stated.

Warwickshire Police stated it was conscious of footage showing to indicate somebody in clothes “resembling a Ku Klux Klan outfit”.

The footage on social media seemed to be on the similar website, the drive stated.

The writing is believed to have been put there at about 05:10 BST on Friday.

Supt Goddard stated: “We can be rising patrols within the space and can be working intently with the native communities to supply them with reassurance.”

Nuneaton and Bedworth Borough Council stated a “substance used to the kill the grass” was used to create the message and the world had now been ploughed over and re-seeded.

Ian Lloyd, portfolio holder for arts and leisure, stated: “This is unacceptable, disgraceful senseless vandalism which can place additional prices on the borough council, but once more diverting invaluable sources away from the opposite grounds upkeep work in making an attempt to maintain our parks and open areas clear and tidy for all to take pleasure in.

“Such incidents incite racial hatred and are a matter for the police to research. Let me make it clear, there isn’t any room for any racist behaviour in our borough.”

Thousands of individuals have marched within the UK as a part of Black Lives Matter demonstrations following the loss of life of George Floyd in Minneapolis final month.