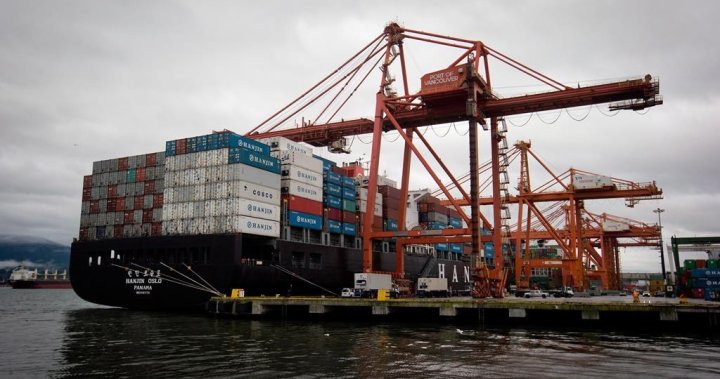 A full house turned out to the Fairmont Waterfront hotel in Vancouver on Thursday to hear from the head of B.C.’s largest port authority, as the province continued to grapple with supply chain woes brought on by unprecedented floods and landslides.

And on that front, Vancouver Fraser Port Authority President and CEO Robin Silvester’s 13th annual “State of the Port Address” to the Greater Vancouver Board of Trade included some good news for shippers.

Read more:
Why Canada’s food inflation may get worse before it gets better

“The port has been directly affected. Rail service was halted for eight days, but as of today both major railways are operating on CP’s line, and CN expects to have their line back in operation within the next 24 hours,” Fraser told attendees.

But despite the short-term improvement in circumstances, Silvester warned that there was work to do to “future proof” the port.

4:45
Impact of B.C. floods on the retail supply chain

Impact of B.C. floods on the retail supply chain

“There’s a growing urgency about discussions for climate adaption and in particular climate resilience and supply chains,” he said.

Silvester said the current extreme weather crises and the COVID-19 pandemic have shown the need to act quickly to shore up supply chain coordination nationally and internationally.

And he said an an increasingly insufficient industrial land base to support shipping and storage was putting the port at risk of emulating its counterpart in Los Angeles, which is notorious for delays.

Ships wait on average 12 days to dock at the L.A. port, and wait a dozen more to offload their cargo, he said. In B.C., the holdup is currently four and four, but Silvester said that was liable to change.

“We’ve run down the clock. It’s midnight. The crisis is here,” he said.

“Without land close to the port to do this quickly and efficiently, shipping lines are simply rushing containers empty back to Asia, leaving Canada’s exporters empty-handed.”

Meanwhile, the federal government and Vancouver Fraser Port Authority announced they are working together to address supply chain disruptions. A statement from the federal ministers of transport and emergency preparedness says the government is contributing up to $4.1 million to ease bottlenecks at Vancouver ports.

The congestion was caused by the aftermath of floods that severed all rail and road travel between Metro Vancouver and B.C.’s Interior.

The statement says the plan, led by the port authority, will add container storage capacity by opening up an undeveloped 16-hectare parcel of industrial land in Richmond to hold empty containers.

Wind and rainfall warnings blanket most of the B.C. as the province continues its rebuild from the flood damage and prepares for more precipitation. B.C. can expect three rainfall events over the next few days, with a major storm forecast to hit the southern part of the province Tuesday, Public Safety Minister Mike Farnworth said.

“If you are in a flood-prone area, be prepared to evacuate if asked,” he said.

The government has been making headway on its recovery, with supply chains stabilizing, gas shortages starting to ease and some evacuees allowed to return to their homes. Canadian Pacific Railway announced its first trains have arrived in Vancouver from Kamloops carrying grain and fuel.

— with files from Dirk Meissner, the Canadian Press