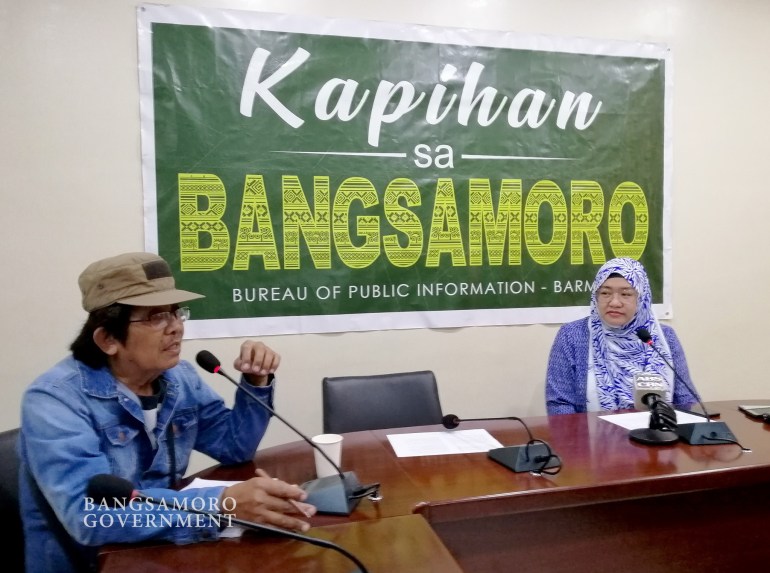 Sha Elijah Dumama-Alba remembers being unable to step out of her home to play with the other children in their neighbourhood on the conflict-ridden southern island of Mindanao in the Philippines.

She grew up as part of the Muslim minority on the island, in Cotabato City, a resource-rich marshland between two rivers that is now the de facto capital of the autonomous Bangsamoro region.

Cotabato had long been divided along religious lines and a hotbed of conflict between government forces and the Moro Islamic Liberation Front, the rebel group leading the fight for an independent state in the south. Christians make up almost half the city’s population, while the other half is mostly the Maguindanaos, an ethnic group known as one of the pillars of the Muslim struggle.

For years, the relationship between the two groups was tense.

Kidnappings were rampant, so even going to school or to the park was a leap of faith, the 39-year-old remembers.

“I was always in a state of fear. There was nowhere to go at that time,” Sha Elijah said, recalling her childhood. Going to the mall with family meant driving all the way to the relative safety of Davao City, more than 200km (124 miles) to the east.

The endless cycle of conflict and violence had a profound impact on the young Maguindanao woman, who yearned for the day that peace would prevail in her homeland.

Now, as the first-ever attorney general of the newly established Bangsamoro Autonomous Region in Muslim Mindanao (BARMM), she finds herself in a position to steer her community towards that peace after more than five decades of bloodshed.

As BARMM marks on Thursday the second year since its foundation, Sha Elijah faces the enormous challenge of helping build an effective new bureaucracy that can sustain the gains of the oast two years.

Because her personal story is bound to the success of that undertaking, she is determined to make it work. In the process, she is also demonstrating to a society still dominated by men how women get things done.

From medicine to law

As a high school student, Sha Elijah saw the displacement and poverty in her community as a result of the fighting, and it reinforced her interest in law and community service.

Coming from a family of doctors, including her father and several siblings, she was obliged to follow tradition and pursued a preparatory medical course at the University of the Philippines in the capital, Manila.

In her third year of university, however, she finally confessed to her father that her heart was not in medicine and she had always wanted to become a lawyer.

“‘Since we don’t have any lawyers in the family,’ my father said, ‘Okay, I’ll support you.’ So, that’s how it came about,” she told Al Jazeera.

“I think it was just really my ambition that drove me to pursue law. I am glad that my family supported me.”

Studying in Manila as a young woman from Mindanao, however, had its challenges, not least of which was the stereotype that she was from the land of “bombings and shootings.”

While she was studying at San Beda University, a Catholic institution in Manila where she had moved when she took up law, her classmates would remark that Sha Elijah “must be a princess from Mindanao” if her parents could afford to send her to Manila to further her education. She had to correct them at every opportunity she got. While her parents are both doctors, they are public servants.

It struck her that many of her classmates in the capital had never met, much less interacted with, a Muslim from Mindanao.

That was when she realised how much work was needed to change perceptions of Mindanao as a perpetual backwater, where poverty and conflict are woven into the history of its people.

“Mindanao cannot be ignored, because we have a lot to offer. Mindanao is the food basket of the Philippines. If we take it for granted, it will impact the whole country,” she said.

It was while she was in law school that Sha Elijah and the rest of the country witnessed then-Philippine President Joseph Estrada’s declaration of all-out war against the Muslim rebels in 2000, after the failure of yet another round of peace talks.

In an act seen as an ultimate insult to the Muslim community, the president and his men celebrated the military victory by feasting on pork and drinking a “truckload” of alcohol inside a mosque, igniting even more serious resentment among the locals, both Muslims and Christians.

The government won the battle but lost the war. The fighting never ended, even as Estrada’s presidency was cut short by a corruption scandal.

The military offensive only hardened Sha Elijah’s determination to help achieve a lasting peace. It was no longer enough to just finish law school and pass the bar exams. She had to return home, to Mindanao.

“I knew that I had to do something. I asked myself, ‘Why did I pursue a law career in the first place?’ … That was because I wanted to contribute and give back to my community in my Bangsamoro homeland. So, I went home.”

And that was how she became involved in the peace process, advising Moro leaders while earning the trust of her community elders, who saw in her not a token female representative but a legal expert and leader able to represent Bangsamoro.

When Estrada was ousted and replaced with Gloria Arroyo in 2001, a new round of violence flared between the military and the Muslim rebels, claiming more lives and displacing thousands of people.

In 2008, one of the most serious chapters of the conflict engulfed many parts of Mindanao after the Supreme Court invalidated an agreement between the government and the rebels. The Moro Islamic Liberation Front retaliated with deadly attacks. The military responded with counter-offensives and air attacks, killing civilians and destroying homes.

It would take another president, Benigno Aquino III, to finally break the impasse and reach a peace deal in 2012 that saw the rebels give up their quest for independence in exchange for more autonomy on an expanded territory.

Even then the process was not smooth, with a bloody, months-long siege of Marawi, one of the crown jewels of the autonomous Muslim region, by Islamic State sympathisers.

More than a thousand combatants and civilians were killed in the fighting, which also displaced nearly a million people.

The upheaval forced the Bangsamoro leadership to confront new realities – including the emergence of armed groups like the Maute Brothers and the Bangsamoro Islamic Freedom Fighters, who have pledged allegiance to the ISIL (ISIS) armed group.

Three years on, tens of thousands of people have not returned to their homes and Marawi remains in ruins. The Bangsamoro government has announced it will provide $10m for the rehabilitation of the devastated city.

Bangsamoro was formally established through a referendum in 2019 under the administration of President Rodrigo Duterte, the first Philippine leader from Mindanao.

When Al Haj Murad Ibrahim, former commander of the Moro Islamic Liberation Front, took the reins as chief minister that year, he appointed Sha Elijah as attorney general, recognising her years of contribution to the peace process.

While law enforcement and prosecutorial powers remain with the central government in Manila, as the Bangsamoro attorney general, she has the authority to help craft new laws and advise the regional sub-state leaders on governance.

“I would say that the confidence that they have entrusted in me is already a big accomplishment for women in general,” she said, hailing the leadership of the Moro Islamic Liberation Front as it transitioned into civilian government.

Much is left to be accomplished by the new Bangsamoro authority, including the crafting of a number of new laws before the transition period ends in 2022, and the first elections take place.

With time running out, Sha Elijah and the Bangsamoro leadership are backing a proposal for an extension of the transition period until 2025.

She stressed that in order to sustain the gains of the peace process, it is important to put in place a fully operational bureaucracy.

So far, the Philippine government has signalled that it would support a possible extension of the transition and Congress is deliberating legislation filed last December for the move.

The “ultimate goal”, Sha Elijah said, is for the Bangsamoro to be ready, regardless of who will inherit the progress achieved so far.

“We are working basically from scratch. We have already made progress, but we still have a lot of unfinished business.”