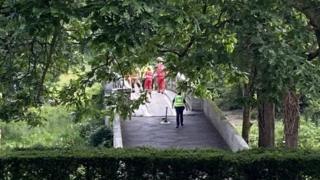 A teenage boy has died after falling right into a river in a Glasgow park.

Emergency companies had been referred to as to Pollok Park simply after 17:00 on Tuesday after reviews of an individual in the White Cart water.

Fire and ambulance service autos had been at the scene and a police helicopter was seen circling the world whereas a rescue boat searched the river.

Police confirmed the physique of a 16-year-old was recovered. It is believed the boy had fallen into the water.

A Police Scotland spokeswoman stated: “Around 17:10 on Tuesday, 30 June, police responded to a report of a priority for an individual in the water at Pollok Country Park, Glasgow.

“Emergency companies attended and the physique of a 16-year-old boy was recovered.

“There aren’t any obvious suspicious circumstances and a report shall be submitted to the procurator fiscal.”