Sajid Javid tonight sounded the alarm over a new ‘worst-ever’ super-mutant Covid variant that will make vaccines at least 40 per cent less effective – forcing flights to be banned from South Africa and five other countries.

Experts explained earlier how the B.1.1.529 variant has more than 30 mutations – the most ever recorded in a variant and twice as many as Delta – that suggest it could be more jab-resistant and transmissible than any version before it.

The variant – which could be named ‘Nu’ by the World Health Organization in the coming days – has caused an ‘exponential’ rise in infections in South Africa and has already spread to three countries – including Hong Kong and Botswana, where it is believed to have emerged.

In response, the Health Secretary announced that flights from South Africa, Namibia, Lesotho, Botswana, Eswatini and Zimbabwe will be suspended from midday Friday and all six countries will be added to the red list.

Israel was the first country to follow suit, also red-listing the six natons.

No cases have been detected in the UK so far but everyone who has returned from South Africa in the past 10 days will be contacted and asked to take a test.

At the moment, around 500 and 700 people are travelling to the UK from South Africa each day, but it is expected this figure could increase as the festive period begins.

Mr Javid said: ‘The early indication we have of this variant is it may be more transmissible than the Delta variant and the vaccines that we currently have may be less effective against it.

‘Now to be clear, we have not detected any of this new variant in the UK at this point in time. But we’ve always been clear that we will take action to protect the progress that we have made.

‘So what we will be doing is from midday tomorrow we will be suspending all flights from six, southern African countries and we will add in those countries to the travel red list.

‘Those countries are South Africa, Namibia, Lesotho, Eswatini, Zimbabwe and Botswana. We will be requiring anyone that arrives from those countries from 4am on Sunday to quarantine in hotels.

‘If anyone arrives before then they should self-isolate at home and take a PCR test on day two and day eight. If anyone has arrived from any of those countries over the last 10 days, we would ask them to take PCR tests.’

The minister added: ‘Our scientists are deeply concerned about this variant. I’m concerned, of course, that’s one of the reasons we have taken this action today.’

Asked what the situation would mean for the UK over the coming weeks, with Christmas approaching, Mr Javid said: ‘We’ve got plans in place, as people know, for the spread of this infection here in the UK and we have contingency plans – the so-called Plan B.

South African scientists, meanwhile, add that they are ‘concerned by the jump in evolution in this variant’. 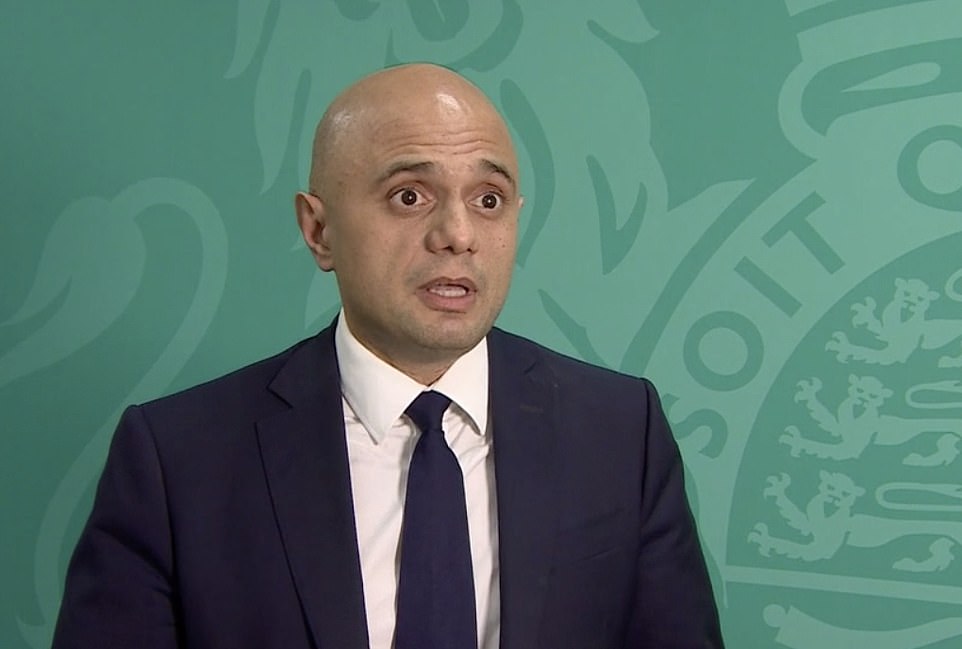 Health Secretary Sajid Javid announced that flights from South Africa, Namibia, Lesotho, Botswana, Eswatini and Zimbabwe will be suspended from midday Friday and all six countries will be added to the red list

This chart shows the proportion of cases that were the B.1.1.529 variant (blue) and Indian ‘Delta’ variant (red) over time in South Africa. It suggests that the mutant strain could outcompete Delta in the province within weeks 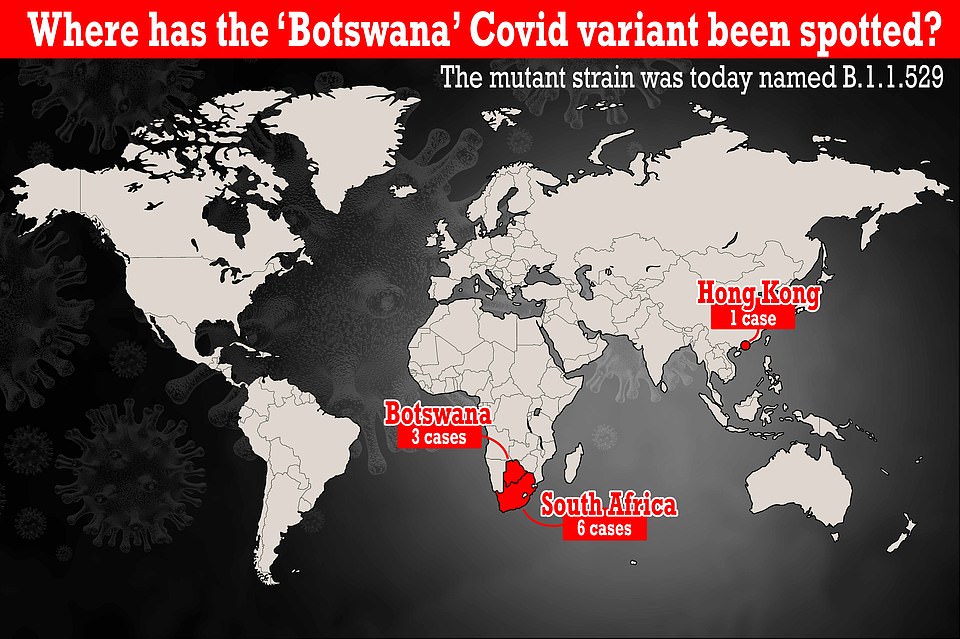 The above slide shows the proportion of tests that picked up a SGTF mutation, a hallmark of the B.1.1.529. It suggests that the Covid variant may be spreading rapidly in the country. The slide was presented at a briefing today run by the South African Government 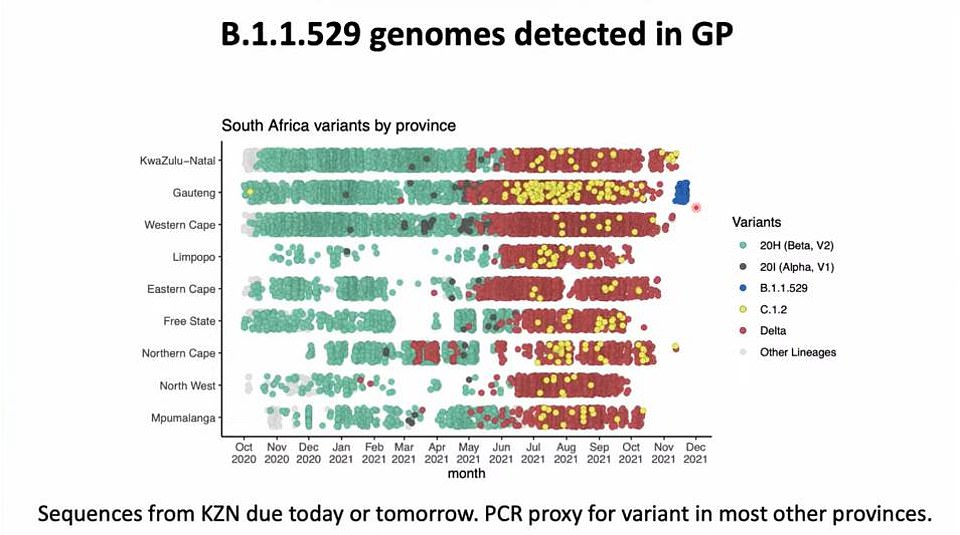 The above slide shows variants that have been detected by province in South Africa since October last year. It suggests B.1.1.529 is focused in Gauteng province. This was presented at a briefing today from the South African Government

The above shows the test positivity rate — the proportion of tests that picked up the virus — across Gauteng province. It reveals that there is an uptick of cases in the northern part of the province. It is not clear whether this could be driven by B.1.1.529

He said that more work was needed to understand how concerning the variant is, adding: ‘From what we do know there’s a significant number of mutations, perhaps double the number of mutations that we have seen in the Delta variant.

‘That would suggest that it may well be more transmissible and the current vaccines that we have may well be less effective.’

The variant has not yet been given the title ‘variant of concern’ in the UK, but one senior UK Health Security Agency (UKHSA) expert said: ‘This is the worst variant we have seen so far.’

Only 59 confirmed cases have been identified in South Africa, Hong Kong and Botswana.

The variant has over 30 mutations – around twice as many as the Delta variant – which could potentially make it more transmissible and evade the protection given by prior infection or vaccination.

The expert whose modelling helped instigate the first coronavirus lockdown said that the decision to impose travel restrictions was ‘prudent’.

Professor Neil Ferguson, a member of the Scientific Advisory Group for Emergencies (Sage), said: ‘The B.1.1.529 variant has an unprecedented number of mutations in the spike protein gene, the protein which is the target of most vaccines.

‘There is therefore a concern that this variant may have a greater potential to escape prior immunity than previous variants.

‘It is also concerning that this variant appears to be driving a rapid increase in case numbers in South Africa. The Government’s move to restrict travel with South Africa is therefore prudent.

‘However, we do not yet have reliable estimates of the extent to which B.1.1.529 might be either more transmissible or more resistant to vaccines, so it is too early to be able to provide an evidence-based assessment of the risk it poses.’

Experts from the UKHSA have been advising ministers on the issue, with a number of scientists expressing serious concern over the variant due to the significant number of mutations in the spike protein.

One senior scientist said: ‘One of our major worries is this virus spike protein is so dramatically different to the virus spike that was in the original Wuhan strain, and therefore in our vaccines, that it has a great cause of concern.’

Experts from the World Health Organisation (WHO) are meeting with South African officials on Friday to assess the evolving situation in the country.

The variant could eventually be given the moniker ‘Nu’ – with the most concerning variants given named after the Greek alphabet.

The original Red List was reduced to zero nations at the end of last month when the remaining seven countries on it were removed.

No10 had left the door open to bringing back the notorious traffic light travel system with Transport Secretary Grant Shapps saying last month hundreds of hotel rooms were still on standby for quarantine.

The UKHSA said it had been in extensive talks with scientists in South Africa about the new variant but the situation is ‘rapidly evolving’.

Although only 100 cases of the new variant have so far been identified, it is already in three countries, suggesting it is more widespread than the official tally.

Two cases have been detected in Hong Kong – both of whom had links to South Africa –three have been picked up in Botswana and the remainder are in South Africa.

But a lack of surveillance on continental Africa may be underestimating the true numbers there, scientists warned.

A baby cries as her mother receives her Pfizer vaccine against COVID-19, in Diepsloot Township near Johannesburg, South Africa

UK experts say it will be another two to eight weeks until they can study the variant in enough detail to work out how infectious or vaccine-resistant it is.

Nationally, infections in South Africa have surged tenfold from 100 per day to 1,100, after the variant was first detected in neighbouring Botswana on November 11.

Only 41 percent of adults have received at least a single dose of vaccine, while 35 percent are fully vaccinated.

In a hastily organised press conference today, the South African Government revealed the variant had been officially spotted in three provinces but warned it was probably already in all nine.

Experts in the UK earlier called for travel restrictions to be reimposed to prevent the strain being seeded here and avoid risking a repeat of this spring when the Delta variant was imported in huge numbers from India.

Zero-Covid scientist Professor Christina Pagel urged ministers to ‘get ahead of this right now’ by immediately’ reimposing the red travel list ‘ — which was only scrapped a few weeks ago.

And Chris Snowdon, an economist who is normally in favour of fewer restrictions, also called for an immediate travel ban.

The Government has left the door open to bringing back the notorious traffic light travel system with Transport Secretary Grant Shapps saying last month hundreds of hotel rooms were still on standby for quarantine.

MailOnline first sounded the alarm about the variant yesterday after British scientists warned that it had more than 30 mutations and is the most evolved version of Covid yet. They said it likely emerged in a long-term infection in an immunocompromised patient, possibly someone with undiagnosed AIDS.

The fact that South Africa has the largest number of people living HIV out of any country in the world has complicated its fight against Covid, as immuno-compromised people can harbor the virus for longer, scientists say. 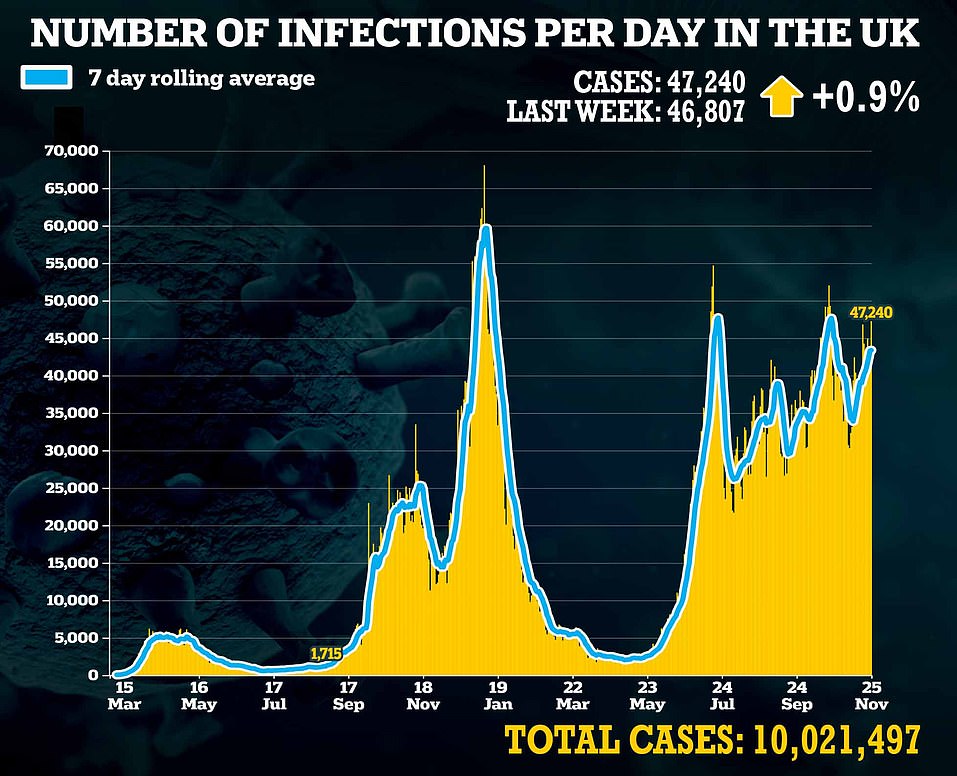 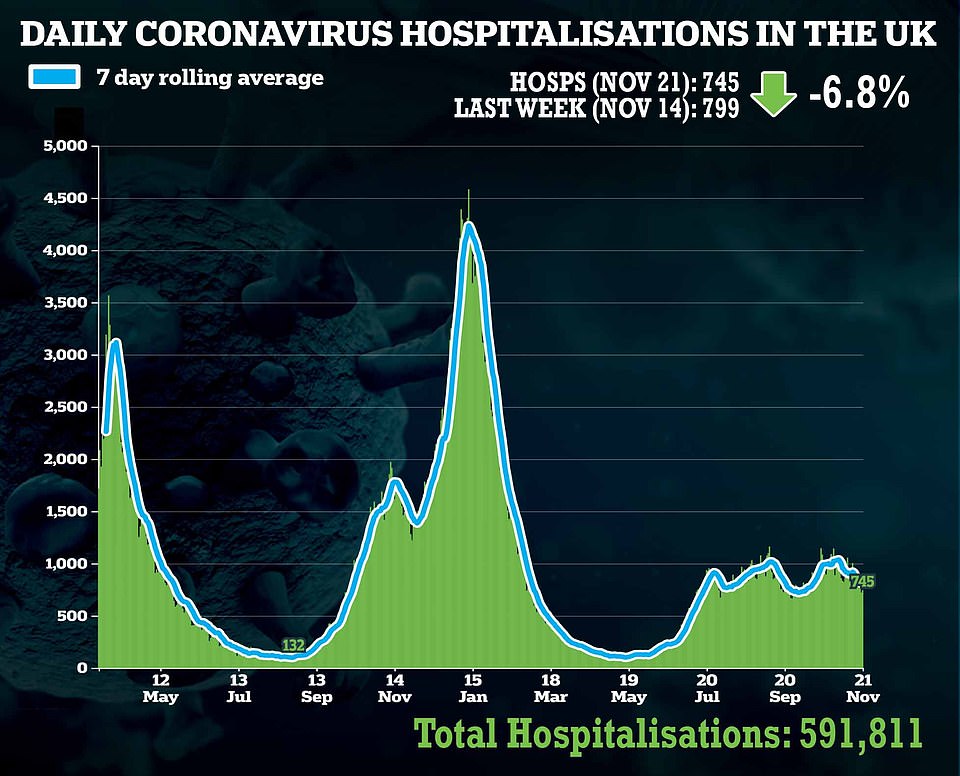 It comes as Britain’s daily Covid cases began to flatline today, official data showed after weeks of falling deaths and hospitalisations. This was the first time the percentage jump was below one since November 10.

Asked whether it could soon make up the majority of cases in South Africa, he told MailOnline: ‘The numbers [of cases] are very small and there is a lot of uncertainty… but I would say it might become dominant very quickly.’

He said it was ‘plausible’ that the variant was more infectious because it was ‘better at infecting’ people that had immunity from vaccines or previous infections.

But he said very little is known about how likely someone who catches the variant would be to become seriously ill and die from the virus. Experts say viruses normally become less virulent over time.

Professor Tulio de Oliveira, a director of Covid surveillance in the South African province of KwaZulu-Natal, said that the variant had spread rapidly in South Africa.

‘In less than two weeks it now dominates all infections following a devastating Delta wave in South Africa.