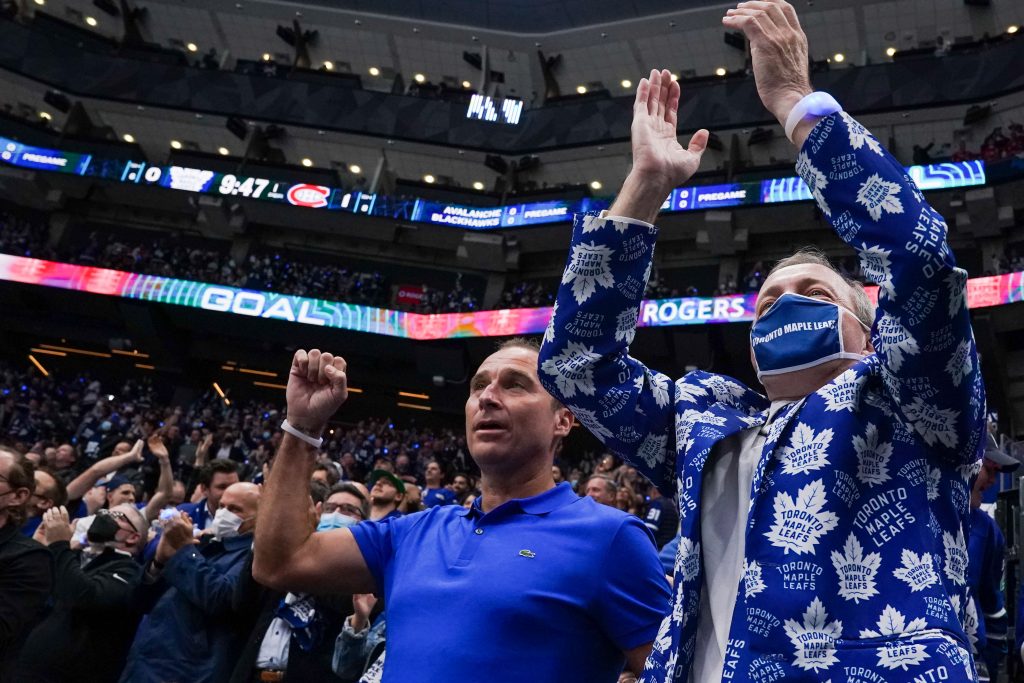 William Nylander could sense the anticipation building right from warmup.

The duo made sure the majority of those in attendance went home happy Wednesday.

Nylander scored the winner early in the third period and Campbell made 31 saves, including some massive stops early with his teammates stuck in the starting blocks, as Toronto defeated the Montreal Canadiens 2-1 in the season-opener for both clubs.

“Just incredible,” Campbell said. “The fans were just super loud and super into the game.

“It’s great to see everybody back.”

Pierre Engvall had the other goal for home side in front of 18,493 masked and fully vaccinated spectators at Scotiabank Arena – the venue’s first crowd for a game that mattered since March 10, 2020, because of COVID-19.

“It was very special,” Nylander added. “Such a long time (since) we played with fans.”

Jonathan Drouin, who’s back with the Canadiens after leaving the team back in the spring to deal with anxiety and insomnia, replied for Montreal.

“It was nice to get one,” he said. “But I wish we got the two points instead.”

Jake Allen stopped 28 shots for the Canadiens, whose surprising run to last season’s Stanley Cup final included a stunning comeback from a 3-1 series deficit against the Leafs in the first round.

It looked like they might heap another dose of heartache – granted with the stakes much lower – immediately after puck drop Wednesday.

RELATED: Scotiabank Arena to welcome back fans, attendees at 50% capacity

“The first 10 minutes we were not good,” Leafs head coach Sheldon Keefe said. “Took us a while to really get comfortable in the game. From then on I thought the effort was really strong. The guys worked, competed.

“It was a tight game right to the end … happy that we find our way to get on the right side.”

Toronto was minus No. 1 centre Auston Matthews, who led the NHL with 41 goals in just 52 games during the NHL’s pandemic-shorted 2021-22 campaign, because of a wrist injury that hasn’t fully healed from surgery, while star winger Mitch Marner dressed after leaving Tuesday’s practice following a collision.

On the other side, Montreal started life in earnest without captain and bruising defenceman Shea Weber due to potentially career-threatening ankle and foot injuries that will keep him sidelined this season, while starting goaltender Carey Price entered the NHL/NHLPA player assistance program last week and will be away from the team until at least early November.

Nylander snapped a 1-1 tie 66 seconds into the third when he took a pass from Morgan Rielly off the rush before faking a slapshot and firing upstairs on Allen’s shortside.

“It’s just what happened,” Nylander said with a grin. “I didn’t really plan on doing anything. Just the way it unfolded.”

The winger had a solid playoffs for Toronto despite his team’s failure to advance – something Keefe said bodes well moving forward.

“Clutch goal for us,” he said. “When you get a chance like that with one of your best players you’re obviously expecting him to be able to capitalize.

Montreal had a terrific opportunity to get back even with a 5-on-3 power play for 1:44, but the Leafs survived thanks to a shot block by Justin Holl with Brendan Gallagher staring at a wide-open net.

The Canadiens got another man-advantage chance with under nine minutes to go in regulation when Nylander went off for tripping. They came up empty handed once again before Toronto held on late.

“The penalty kill was a huge factor,” Holl said. “Any time you can win or tie the special teams battle, we feel pretty confident our ability 5-on-5.”

Fans of both teams milled about Toronto’s downtown core in the hours before the game, including near the atrium off Maple Leaf Square that was used as a COVID-19 testing site for arena staff, team employees and media last season.

The 48th Highlanders, who have performed at every Toronto curtain-raiser since Maple Leaf Gardens opened in 1931, kept the tradition alive virtually last season, and were back with their pipes and drums on the ice prior to warmups.

With a group of front-line workers in attendance, Hamilton-based Arkells rocked out in a pre-recorded performance outside the Leafs’ locker room before anthem singer Martina Ortiz Luis encouraged fans to take over the singing of O Canada with Scotiabank Arena mostly full for the first time in 582 days.

“Right from the time I walked out onto the bench or the introductions it was just different,” Keefe said. “It’s been a long time since we’ve seen the place full like that. I thought the crowd was engaged right from the start.

“They were a real factor in the game.”

While that crowd, which was short of a sellout, was ready to go, Toronto certainly wasn’t as Montreal had five excellent scoring chances in the game’s first three minutes on the razor-sharp Campbell.

The Canadiens eventually jumped in front at 7:22 of the first when Drouin scored off a 2-on-1 rush after the Leafs turned the puck over at the offensive blue line.

“My head’s clearer,” Drouin said when asked how he feels now compared to when he stepped away back in April. “I’m more in the game, I’m more focused, I’m more ready.

“Going to the rink was a completely different experience for me than the past couple years.”

The Leafs would finally get in gear, and Engvall scored the first power-play goal of his career at 10:12 when he fired past Allen.

Montreal’s goaltender was then bailed out by the iron twice, including late in the period on a deflected Rasmus Sandin effort that rang off the crossbar and had the crowd buzzing.

“You really take for granted playing in front of fans when you have a year like last year,” Holl said. “It was really terrific.”

“It powered us, there’s no question about it.”