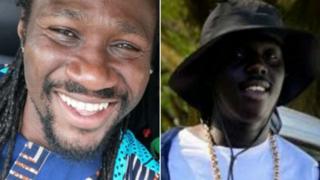 A killer who gunned down two males at a lockdown social gathering is “hiding like a rat”, the dad of one of many victims has mentioned.

Abayomi Ajose, 36 and Cheriff Tall, 21, had been killed on the Moss Side social gathering within the early hours of 21 June.

In a message to the killer, Mr Tall’s father Mousa, mentioned: “You had been so massive to kill Cheriff… immediately you might be so little. You are hiding like a rat.”

A 32-year-old lady, arrested on suspicion of homicide, has been launched on bail pending additional inquiries.

The victims, who didn’t know one another, had been shot on the social gathering off Caythorne Street shortly earlier than 01:00 BST and died in hospital.

“This is going to be between you and Cheriff within the subsequent life.”

Police imagine the killer was not from Manchester.

Det Ch Insp Stuart Wilkinson mentioned “there have been 300 individuals at this gathering”.

“I’m fairly positive there are eyewitnesses. We desperately want individuals locally to come back ahead.”