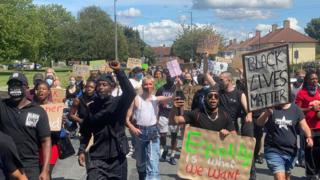 A Black Lives Matter protest has been held outdoors a Bristol hospital the place a employee was attacked.

The sufferer, a 21-year-old musician generally known as Ok or Ok-Dogg, was hit by a automotive whereas strolling to the bus cease from his job at Southmead Hospital on 22 July.

Police mentioned it was being handled as racially-aggravated as a result of language utilized by the automotive occupants. Two males had been arrested on Saturday.

Ok-Dogg suffered accidents together with a damaged leg, nostril and cheekbone.

The protest, which passed off at lunchtime, began on Monks Park Avenue, pausing outdoors Southmead Hospital for about 10 minutes and stopping visitors once more on the double mini-roundabout by the Lidl retailer.

Escorted by police, it then looped via Southmead earlier than returning to Monks Park Avenue the place the gathering heard speeches from organisers.