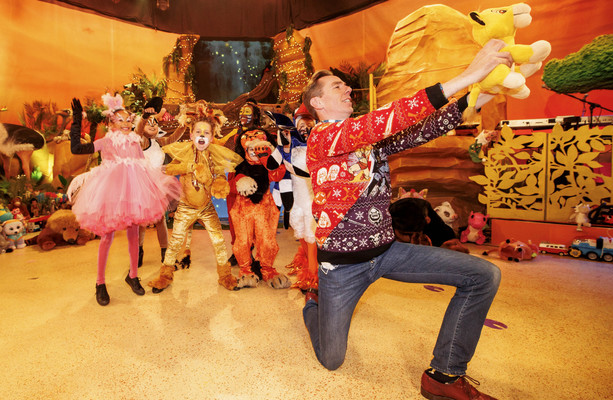 THE PRIDE LANDS of Africa are coming to your living room tonight and Ryan Tubridy is promising an evening of ‘no worries’ with the Late Late Toy Show’s Lion King theme.

“Everyone has been locked up for a long time and that’s why we need to head out into the wild and join our friends in The Lion King,” presenter Ryan Tubridy said ahead of the show tonight.

“This isn’t just a theme; it is a movement. Every child can leave the house and leave the room and leave the kitchen and roam free in the jungle of their families because they are the boss tonight. So, it is the future, it is wild, and it is beautiful.”

Speaking to reporters, Tubridy said he had been “bowled over” by the resilience of children during the pandemic.

“Just when you thought kids couldn’t be more impressive and amazing,” he said.

He said he is also conscious that people have high expectations as they look to the Toy Show to lift their spirits.

“People are sad, people are worn out, people are weary and they’re looking at us to say ‘give us some colour in our lives, brighten our day’, he said. “And that’s that’s a big ask because I don’t want to let people down.”

The Toy Show host had a special message for children as they look forward to the show tonight:

Children, you’re in charge. You’re the boss now, for this night, on one night only, your parents are your slaves. You do what you want to do, you eat what you want to eat, you say what you want to say, and you stay up for as long as you want to stay up. And when the parents of Ireland are peeling their children from the ceilings and walls, I say to them; you’re welcome.

He also reminded children not to “ask for too much” because of supply line issues in the North Pole.


Tubridy said Santa had been in touch and told him that he and his elves are “flat out” and he’s asking children to be conscious of that when asking for toys.

Ahead of the show tonight Tubridy encouraged people to shop this Christmas in smaller local businesses, which he said had had a “big struggle” since the start of the pandemic.

“From the get go, that’s been something very close to my heart, whether it’s the independent bookshops, or for the day that’s in it, it’s it’s toy shops,” he said. “So every village and town in Ireland generally has a bookshop or a toy shop, used to have a post office, whatever it might be.

They’re the the heartbeat of the community. And if they’re gone, where do people go to meet somebody else to come up with ideas to keep the community story alive? It’s really awful.

“So what we’ve got to do is, yes, of course, it’s convenient sometimes and yes,I understand sometimes it’s a little cheaper to buy online, but if you can, to keep the shops and the family businesses that have been there for decades and decades going. I would urge people to get the toys, on their books or whatever they can from there, because they need it in a way that Jeff Bezos doesn’t.”

The Late Late Toy Show airs today at 9.35 pm on RTÉ One and the RTÉ Player. The Toy Show appeal, which raised €6.6 million last year, is running again this year and donations can be made here.