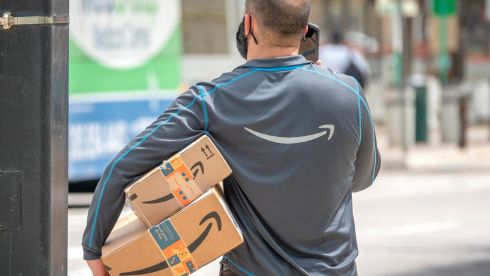 Last year, Daniele, a third-party delivery driver for Amazon in Italy, noticed that hundreds of euro in traffic tickets were being deducted from his €1,600 monthly salary. But far from being a careless driver, he claimed, his speeding and parking offences had been necessitated by the company’s demanding schedule.

“We are held hostage by an algorithm which calculates daily routes for us and demands an average of 140 deliveries during an eight-hour shift,” he said during a strike in Castel San Giovanni last week over labour conditions at Amazon. He stood in front of a sign that read: “We are people not packages.”

Amazon Italia rejected the suggestion that delivery providers are put under undue pressure by the company’s algorithm, arguing that its workers are all beneficiaries of national collective bargaining.

Yet, Daniele – who declined to give his surname – insisted that workers “are expected to deliver one package every three minutes. Of course we speed, or park the van on driveways, and then the company makes us pay for the fines.”

The protest, which was the first nationwide action among Amazon’s 9,500 Italian staff, hints at trouble ahead for gig companies in Italy. The country, which has unusually steep employment costs and an aggressive government stance on workers’ rights, is fast emerging as the next major front in the companies’ escalating global battle over labour laws.

Last month, Italian gig economy workers scored a big victory when a Milan court fined food delivery platforms €733 million for violating employment safety laws, and said riders should be hired on a quasi-employee basis. The ruling came less than a year after the Milan court launched an investigation into Uber Eats’ recruitment practices and placed the company’s Italian subsidiary into external administration.

Meanwhile, prime minister Mario Draghi’s new coalition government is working with Spain to draw up new regulation for workers on digital platforms, and pushing for co-ordination on gig workers’ rights across the European Union.

“I support the need to find some form of protection for these new types of [business] relationships,” labour minister Andrea Orlando, told the Financial Times. “This means helping to build an efficient and orderly system.”

The actions come as the employment models of gig companies across Europe are being increasingly challenged. Earlier this month, Madrid’s Socialist-led government announced it would introduce a decree to give employee status to gig delivery workers following a national court ruling last year.

A similar ruling in London last month forced Uber to classify drivers as workers, triggering a wave of concern among investors over the viability of the gig model. Several large groups shunned this week’s calamitous London listing of Deliveroo, in which almost £2 billion (€2.3 billion) was ultimately wiped from the company’s value in the first day of trading, citing concerns over labour regulation, among other factors.

For the time being, Rome has stopped short from imposing employee status on gig workers. But with a steady rise of unemployment across the country, gig delivery jobs have recently become the only possible source of income for many Italians, sparking a heated political debate over a sector that until recently was considered niche.

“The priority is to avoid workers’ exploitation,” said Orlando, a member of the centre-left Democratic party.

Italy’s ecommerce sector has grown exponentially during the pandemic, with online purchases increasing 30 per cent and online food orders rising 70 per cent over the past year, according to the NetComm eCommerce B2C observatory, presenting an attractive opportunity for gig companies in one of Europe’s largest and fastest-growing markets.

At the beginning of 2020, Deliveroo – the largest food delivery platform in the country – announced it would double its presence in the country during the first half of the year. Before the pandemic, food delivery activities were worth €566 million in Italy, with only 18 per cent of the total processed through food delivery apps. According to pre-pandemic estimates by Just Eat, platforms’ revenues will pass the €1 billion mark by 2023.

A year of pandemic lockdowns have given the platforms a further boost in a scarcely digitalised country where cash is still the preferred method of payment.

“The risk is that gig economy is seen as marginal while it is generating increasingly large profits for companies and its workers must be protected,” said Andrea Borghesi, a member of the CGIL union.

“Amazon workers have employment contracts, but they share a very intense pace of work with riders.”

Some of the major platforms are already taking steps to safeguard the future of their Italian operations. Last week, Deliveroo, UberEats, Glovo and SocialFoods accepted the ministry’s invitation to join a bargaining table with workers’ unions, and signed a protocol with Orlando agreeing to implement policies to fight illegal employment practices such as labour exploitation.

Matteo Sarzana, president of Italy’s food delivery platforms organisation Assodelivery, described the protocol as “another step forward in the safeguard of riders’ work to combat illegality”.

So far, however, all the major platforms still insist their workers are independent contractors. The exception is Just Eat, which has for the first time begun hiring about 4,000 of its riders this month in the city of Monza, a few kilometres north of Milan.

“This is a novelty for Italy because it’s a model that makes riders’ employment a sustainable choice,” said Daniele Contini, Just Eat’s Italy country manager. Just Eat’s contract stipulates a fixed hourly pay rate regardless of the number of deliveries, as well as insurance cover, sick pay, holiday, parental leave and pension contributions for workers.

“Just Eat is an isolated case that serves as a cause for reflection,” said Orlando.

“Our objective isn’t to tell companies how they should define their workers, but to facilitate a dialogue between the different parties . . . what matters is that everyone realises there is a problem that needs to be tackled.”