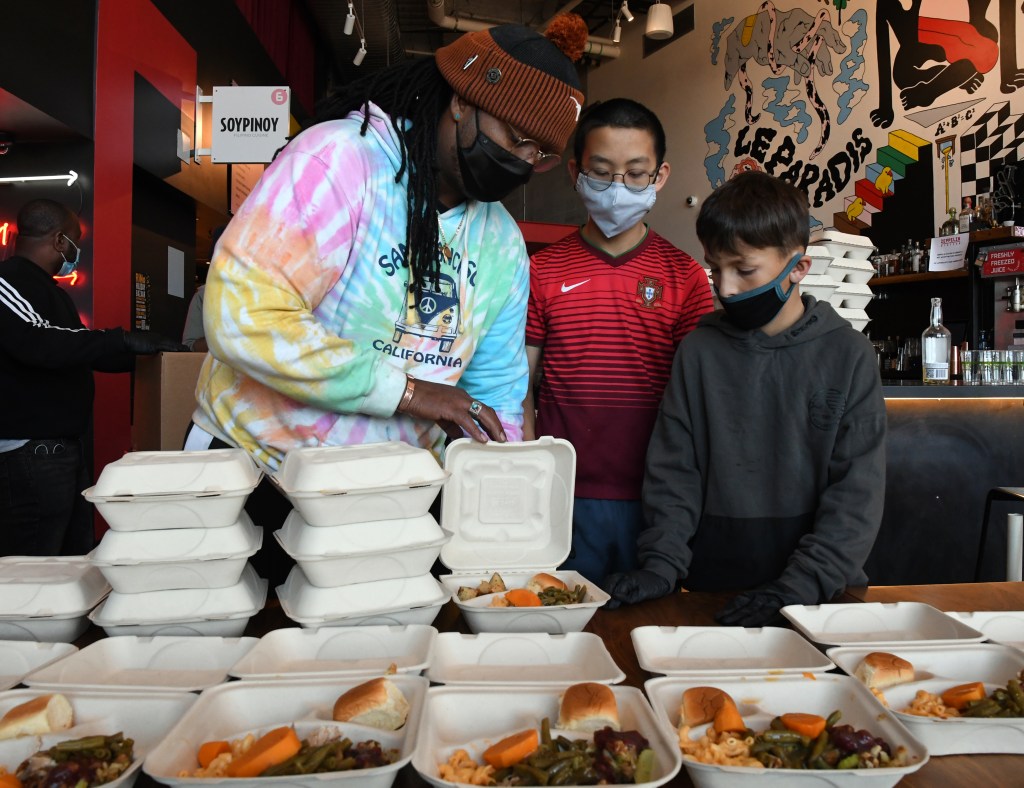 Denver chef Tajahi Cooke was busy cooking, packing and distributing thousands of charitable Thanksgiving meals Thursday morning, but when he saw a young man in need outside one of his headquarters, he paused to take the person a plate of hot food.

Cooke took a time out with the man in need — who sat outside Zeppelin Station Thanksgiving morning wrapped in a blanket and without shoes — to talk with him and give him a warm meal.

This was the generous spirit Cooke and his team were all about.

“I just want to inject some good into the world,” Cooke said.

Cooke, his wife Danielle and a crew of more than 100 volunteers were hard at work for the chef’s third annual Ms. Betty’s Harvest Madsgiving — a Thanksgiving event in which Cooke partners with local farmers, chefs, food distributors, volunteers and organizations helping the needy to cook and hand out thousands of Thanksgiving meals across the Front Range.

Volunteers with touching stories have reached out to Cooke, offering their help on the holiday.

“We’re talking about beautiful moms who are joining us this year in homage of their daughter who passed, “Cooke said. “We’re talking about individuals in their 20s who can’t afford to go home, people in their 60s and 70s who just don’t have any family and don’t have anywhere else to go. I’m actually seeing this being impactful on both ends — individuals who are in need and getting fed and those who are volunteering to help. It’s an emotional conversation.”

Cooke, who said he comes from humble beginnings, often prepared food for people experiencing homelessness and gave it away while driving around Denver. For the past few Thanksgivings, Cooke and his team have been doing the same on a bigger scale.

The homemade meals would be passed out to Salvation Army locations, church groups, Volunteers of America and people across the Front Range who could use some holiday spirit.

When oven space at Zeppelin Station became tight, Nicolaus Weber began manning the grills outside the Denver food hall. The Zeppelin Station kitchen manager cooked up trays full of spatchcocked birds and basked in the aroma of grilled meats.

Inside the restaurant space, benches that normally seat patrons were packed with trays full of food waiting to be packaged by bustling volunteers.

Marissa Miceli and her 10-year-old son Rocco Miceli scooped potatoes into containers destined for hungry bellies across the Denver metro.

The mother-son duo saw a call for volunteers online and wanted to spend their Thanksgiving helping others.

“We’re so fortunate,” Miceli said. “It’s the least we can do. It’s my responsibility to raise a gentleman.”

Rocco carried trays of food around the building, getting them ready to be packed up in trucks for local delivery.

“There are people less fortunate than me, and I just want to help them,” he said.