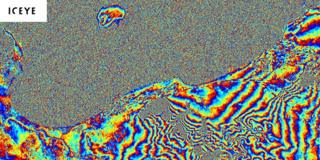 European “new space” company Iceye has demonstrated a radar technique in its small satellites that has in the past been performed only by the biggest of spacecraft.

The approach has myriad applications, from tracking subsidence to tracing ground ruptures from Earthquakes.

The high-fidelity spacecraft that have traditionally done this work have weighed perhaps a couple of tonnes.

It’s another example of how emerging space companies are wringing capability out of small packages – something they can do as they exploit the very latest commercial, “off-the-shelf” technologies, such as those developed for consumer electronics.

Iceye, based in Helsinki, Finland, currently operates four radar satellites in orbit but has plans for many more.

InSar marks an important milestone for the company because it is one of the most difficult techniques to master.

It requires very precise control of a spacecraft to ensure that when it comes back over the target scene, its images are coherent.

“It’s all down to the details,” said Rafal Modrzewski, CEO at Iceye.

“First you have to inject your satellite into its correct orbit, and then precisely monitor and maintain that orbit. And then your radar instrument needs to be precise enough that it retains coherence between consecutive images. Only then it works. These precision achievements tend to be the domain of high-fidelity, expensive systems. It’s taken quite a bit of development on our part to get there,” he told BBC News.

Iceye has been working very closely with an Austrian firm called Empulsion, which makes small ion engines for satellites. The European Space Agency (Esa), whose own satellites have very much pioneered InSar, has also been advising on the project.

Like radar images in general, InSar data requires some expertise to interpret. Analysts will use interferograms to illustrate changes in the shape of the ground below from one satellite pass to the next. Each map is made up of a series of coloured “fringes”. Each fringe will describe the movement either away or towards the spacecraft.

The technique is used to monitor the stability of infrastructure, such buildings and bridges. Scientists employ the approach to watch for sagging on a hill slope which might indicate a landslide is imminent; or to alert them to a bulge in the flank of a volcano that’s about to erupt.

Leeds University’s Prof Tim Wright is director of the Centre for Observation and Modelling of Earthquakes, Volcanoes and Tectonics (Comet). His group regularly exploits InSar data acquired by governmental radar satellites, such as Esa’s Sentinel-1 system.

He commented. “The possibility of doing InSar with these microsatellites at very high resolution with rapid revisit time is really exciting and could open up many new monitoring applications (largely commercial I think).” But he added that it was now for Iceye to show it could deliver regular, quality interferograms.

At the moment, the repeat over the same ground target is 18 days. But with many more satellites in orbit, this will come down. Iceye wants to get under 24 hours.