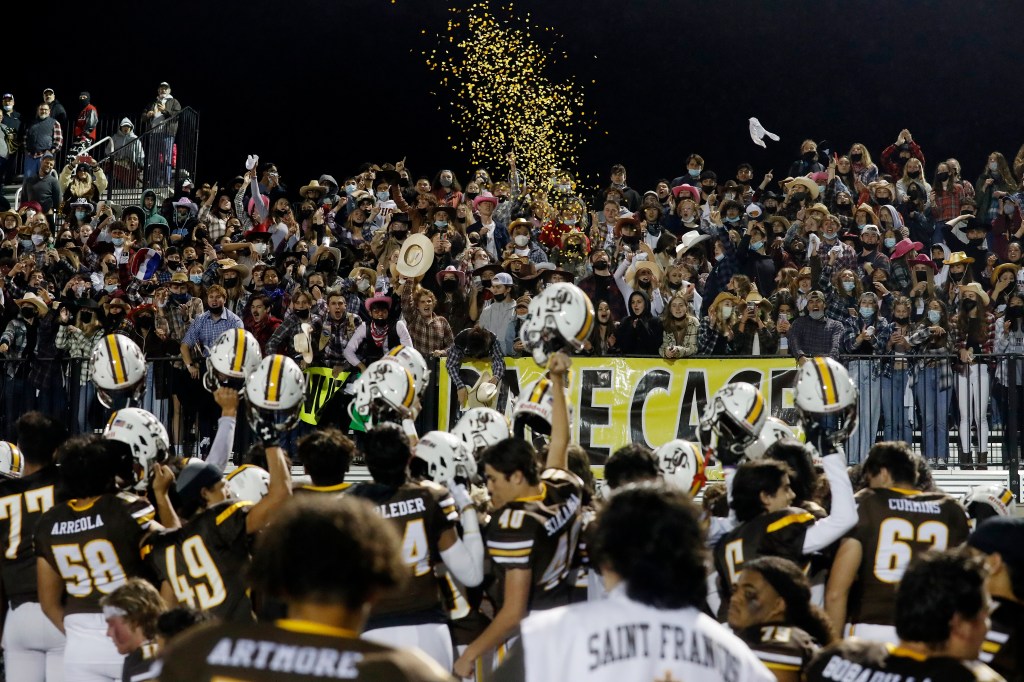 No. 2 Serra (10-1) vs. No. 1 St. Francis (11-0) in Division I final, Friday at Westmont HS, 7 p.m.: Second matchup this month between the section’s top two teams. St. Francis won the first game in dominant fashion, with Viliami “Juju” Teu rushing for a school-record 344 yards and two touchdowns in 45 carries to lead the way as the Lancers avenged a 49-7 loss at Serra in the spring. The 44-21 victory at Serra on Nov. 6 clinched the West Catholic Athletic League championship for St. Francis. A victory Friday would pad the school’s record of CCS football titles to 17. St. Francis is 15-12-1 in CCS finals, a resume that includes excruciating losses in their past three appearances, to Oak Grove in 2015, Serra in 2017 and Valley Christian in 2018. (The Lancers shared a title with Los Gatos in 2002 when the teams tied 21-21). Serra is 6-0 in CCS finals, including 5-0 under longtime coach Patrick Walsh. This will mark the fourth time since 2016 that the teams have played twice in the same season. The previous three times, the winner of the first game won the rematch. Calpreps.com’s computer predicts that trend to continue. It says St. Francis wins on Friday, 34-24. — Darren Sabedra

No. 4 Menlo School (12-0) vs. No. 3 Wilcox (8-4) in Division II final, Saturday at Westmont HS, 7 p.m.: One of the weekend’s most intriguing matchups, with Wilcox and its veer option offense — a staple of the Santa Clara school’s program for many years — facing undefeated Menlo School and its record-setting passer, senior Sergio Beltran. Wilcox tested itself against some of the Bay Area’s top teams early in the season and took some losses against the likes of Pittsburg and Valley Christian. But the Chargers have been rolling since losing a league game to Los Gatos on Sept. 24, winning seven in a row. They advanced last weekend when Andrew Palacios scored on a 74-yard run in the fourth quarter against St. Ignatius. Luther K. Glenn and Palacios each ran for more than 100 yards in the 20-13 semifinal victory. In Menlo’s 45-35 win last weekend over top-seeded San Benito, Beltran was 35 of 43 for 368 yards and three touchdowns and also ran for three TDs. He set a CCS regular-season record with 44 touchdown passes. He has thrown seven more in the playoffs to break the section’s season record. Menlo is 0-4 in CCS finals. Wilcox is 2-8 in section title games, including five losses in a row. Calpreps.com’s computer predicts Menlo to win 31-30. — Darren Sabedra

No. 4 Christopher (7-5) vs. No. 3 Sacred Heart Cathedral (5-7) in Division III final, Saturday at Sequoia HS, 7 p.m.: Sacred Heart Cathedral started the season 0-5. Since then, the San Francisco school has won five of seven, including victories over Bellarmine and St. Ignatius during West Catholic Athletic League play. The Irish rolled through Mountain View 42-14 in the semifinals last week. Christopher overpowered top-seeded Leland 36-11 to win its semifinal. Both teams are 1-0 in CCS finals, with SHC winning a title in 2008 and Christopher claiming one in 2017. Calpreps.com’s computer is taking SHC, 21-14. — Darren Sabedra

No. 3 Sacred Heart Prep (5-7) vs. No. 1 Homestead (7-5) in Division IV final, Friday at Sequoia HS, 7 p.m.: SHP is no stranger to section finals, having won five of them in seven appearances. Homestead is 0-2 in CCS finals. SHP has gotten hot down the stretch this fall. In the semifinals last weekend at Hillsdale, the Gators built a 21-0 lead in the first quarter and went on to win 42-14. Homestead reached the final with a 36-18 victory over Santa Teresa as Derek Sheerer led the way with 225 yards and three touchdowns in 10 carries. Calpreps.com computer projects SHP to win 27-20. — Darren Sabedra

No. 7 St. Francis-Watsonville (9-3) vs. No. 1 Aragon (8-4) in Division V final, Saturday at Westmont HS, 1 p.m.: Aragon is back in the title game for the first time since 1998, when it lost to Monterey. Its only previous section crowns came in 1992 and ‘94 under coach Britt Williams. The Dons have struggled against the toughest teams on their schedule, going 0-4 and losing by an average of 31.5 points to Menlo, Homestead, Leland and Hillsdale. The St. Francis Sharks are newcomers to a section title game, never before having appeared in one. The school is only 20 years old and had just two winning seasons before John Ausman became the coach in 2017. He has produced three teams with above .500 records. This year’s Sharks have won nine straight since dropping their first three games, including a 42-6 decision to Mission Prep-San Luis Obispo, the highest-rated team on St. Francis’ schedule, according to calpreps.com. St. Francis will run almost every chance it gets, averaging 239 yards per game on the ground to just 95.7 yards passing. Leading rusher Johrdan Garibay has run for 1,362 yards and 20 touchdowns. Calpreps.com’s computer predicts Aragon to win 38-31. — Mike Lefkow

No. 3 Clayton Valley Charter (9-3) at No. 1 Pittsburg (8-2) in Division I final, Friday, 7 p.m.: That Pittsburg hasn’t won an NCS title since 1991, and has only captured three since the playoffs began in 1975, might be the most deceiving number in the section’s record book. Since winning their last section title in 1991 — a 35-27 thriller over De La Salle — the Pirates have been eliminated by DLS in the finals or semifinals 16 times. So two years ago, the NCS created Open/Division I, sending the loser of the Open title game to the Division I championship. Hello Pittsburg. The new format made its debut this fall because there was no season last fall. Clayton Valley has won four NCS titles since 1991, but the Ugly Eagles have lost five of six to the Pirates in what is known as the MaxPreps era that began in 2004. That stat is deceiving, too. Pittsburg and Clayton Valley have played a lot more than six times, as both were in the old Diablo Valley Athletic League for over two decades in the last half of the 20th century. The big question Friday will be the health of Pirates quarterback Jaden Rashada. According to Pitt coach Victor Galli, the four-star recruit was “gimpy” in last Friday’s 42-14 loss to De La Salle. The Uglies have their own injury concerns, as three defensive players had to leave their 24-21 win over California. Eagles coach Tim Murphy said two are questionable, that it will be a game-time decision. Calpreps.com’s computer picks Pittsburg, 28-27. — Mike Lefkow

No. 4 Campolindo (9-3) at No. 3 Foothill (10-2) in Division II final, Saturday, 7 p.m.: Both teams have been terrific stories this season. Campolindo, with its rich history of success under longtime coach Kevin Macy, had two horrific losses on their home field in Moraga, 49-0 to Aptos and 35-0 to Benicia. But the Cougars roared back behind standouts such as QB Dashiell Weaver. They claimed a share of their league title with Las Lomas and Benicia and then stunned top-seeded San Ramon Valley 17-14 in the semifinals last weekend. Foothill has steadily improved as the season moved along, with its best game yet coming in the semifinals. Playing on the road against second-seeded Rancho Cotate, the Pleasanton school finished with five sacks — two by Noah Lombardi — and yielded just 230 yards in a 35-7 victory. Sophomores Jackson Chandler and Samear Lattier each ran for more than 100 yards and Nick Walsh threw for a touchdown against Rancho. Campo is seeking its seventh NCS title, having won five since 2011. Foothill is a four-time NCS champion, with its most recent title coming 21 years ago. Calpreps.com’s computer, which picked San Ramon Valley to pound Campo last week, is taking Foothill to win Saturday, 27-14. — Darren Sabedra

No. 3 Benicia (9-3) at No. 1 Windsor (10-1), in Division III final, Friday, 7 p.m.: Part two of Benicia’s revenge tour is heading north on Friday, where the Panthers will seek to get even after losing to Windsor 38-14 during the regular season. The game wasn’t that close. Windsor led 31-0 before Benicia scored late in the third quarter. Benicia has already evened the score with one regular-season opponent, beating Las Lomas in the semifinals last Friday. Guardian Harper took a fourth-quarter fumble 61 yards to the house in the 17-14 win. “They beat us pretty good the first time,” Panthers coach Craig Holden said of Windsor. “This should be a good rematch.” Benicia has never won an NCS football crown, partly because it spent many years in the Sac-Joaquin Section. The Panthers switched sections in 2018. Benicia did win a D-III SJS title in 1982, beating Ripon. The year before they played for the section championship but lost to Central Catholic. Windsor’s only NCS title came in 2011, when it upended Concord 28-20. The Jaguars are in their first season under coach Paul Cronin, who built a powerhouse at Cardinal Newman before leaving after the COVID-shortened 2020 season. Calpreps.com computer is taking Windsor, 31-21. — Mike Lefkow

No. 3 Justin-Siena (7-5) at No. 1 Salesian (8-2), in Division VI final, Saturday, 1 p.m.: A couple of old hands will tangle when Justin-Siena visits Salesian. The Pride has won five NCS titles since 2010 and six overall while bouncing between Divisions 5, 6 and 7. Two years ago, Salesian won its first state championship, beating Bishop Union. Salesian is guided by Chad Nightingale, who has been the school’s head coach since 1996. Justin-Siena will be seeking its sixth NCS crown and first under coach Brandon LaRocco, who replaced the very successful Rich Cotruvo in 2016. Despite the success Salesian and Justin-Siena have had in the section playoffs, the schools have only played against each other for the championship one time, in 2008 when the Braves won 28-14. It was also the last time these teams squared off against one another. Justin-Siena holds a 2-1 series edge against Salesian. Calpreps.com’s computer projects Salesian to win 27-21. — Mike Lefkow

Note: The loser of the Open Division championship plays the winner of the bottom half of the bracket for the Division I championship.