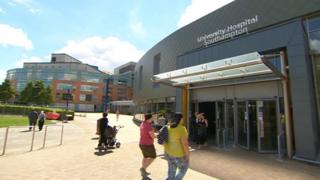 A two-year-old girl died 11 days after she apparently ingested toilet cleaner, a coroner has stated.

Arietta-Grace Barnett, from Sarisbury Green in Hampshire, was taken to hospital in July 2019 and recognized with a possible abdomen bug and tonsillitis, a pre-inquest evaluate heard.

She died per week after being discharged from Southampton General Hospital.

The girl fell ailing on 28 June and was discharged from hospital on 2 July with a analysis of potential gastroenteritis, the courtroom heard.

The two-year-old was reviewed at an outpatient clinic on 3 July with out her situation inflicting alarm, the coroner stated.

On 9 July she suffered a nosebleed and vomiting and died later in hospital.

Ms Rhodes-Kemp stated the girl’s mom, Lucy Cook, was involved concerning the hospital’s choice to not carry out an inside gastroscopy examination.

The dying was the topic of a police investigation and likewise an NHS Serious Incident report, the coroner stated.

The video-link listening to was adjourned with out additional particulars being given.

A full inquest is predicted to happen later this 12 months or early in 2021, the coroner stated.

A Hampshire Police spokesman stated: “Officers made inquiries into the precise circumstances of her dying and a file has been ready for the coroner.

“We haven’t arrested anybody in relation to this.”