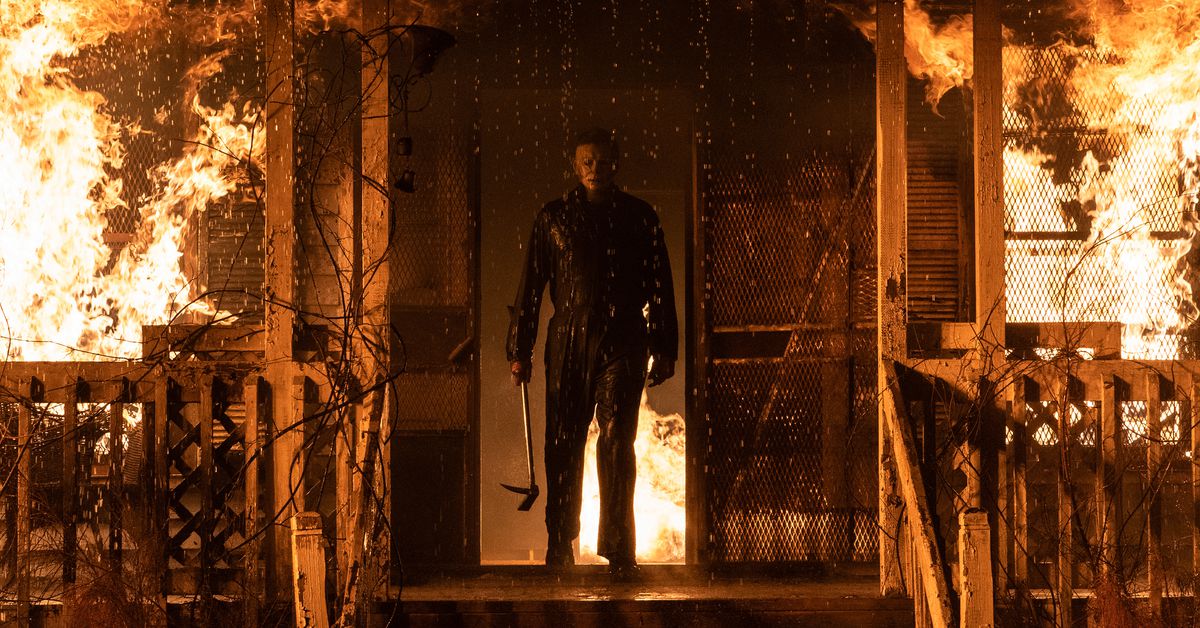 “Evil dies tonight!” – Wildly optimistic and more than a little naïve chant from the citizens of Haddonfield, Illinois, as they form a mob to go after Michael Myers.

For those of you keeping gore, I mean score, at home, Michael Myers a.k.a. The Shape from the “Halloween” movies will be celebrating his 64th birthday in a few days, but the relentless killer behind the white mask remains in remarkably good shape. I guess a steady appetite for destruction and gruesome kills keeps one slim, trim and grim.


If there’s one thing the good folks of Haddonfield, Illinois, should know by now, it’s that nearly 60 years after 6-year-old Michael murdered his teenage sister Judith, 35 years after Michael went on a killing spree in the late 1970s and just hours after he wasted more than a dozen locals, he has morphed into something otherworldly, something virtually unstoppable, something as powerful as a superhero villain. And yet when a diminutive, portly, escaped mental patient who looks like an unkempt Wallace Shawn wanders into a hospital where an unruly mob has gathered and the poor soul starts wobbling around, the townsfolk think this guy is the evil entity who has wreaked so much carnage, and they start chasing him around as if they’re in a bad “Frankenstein” sequel. Come on, mob!

That’s only one of the head-scratching, unintentionally comedic, ludicrous developments in the thudding disappointment that is “Halloween Kills,” the follow-up to the exciting and clever 2018 reboot/sequel that marked the return of Jamie Lee Curtis and was a direct sequel to the 1978 original. You can throw out “Halloween II” and “Halloween III: Season of the Witch” and “Halloween H20” et al., and consider this the third installment in this particular version of the HCU (Haddonfield Cinematic Universe), with numerous callbacks to the 1978 and 2018 films and a myriad of characters who were children back in the late 1970s and narrowly escaped Michael’s grasp and are now grown-ups who are still haunted and want this embodiment of evil to, you know, die once and for all.

Good luck with that.

“Halloween Kills” picks up in the aftermath of the 2018 film, in which Laurie Strode (Jamie Lee Curtis), her daughter Karen (Judy Greer) and her granddaughter Allyson (Andi Matichak) trapped Michael Myers in a safe room in Laurie’s house and set the place ablaze. As Laurie is rushed to the hospital with a stab wound in her abdomen, she sees firetrucks heading to her home and cries, “Noooooo! Let it burn!” Alas, emergency responders arrive on the scene just in time for Michael to rise from the burning basement and systematically take them out, one by one — and he’s once again unleashed on the streets of Haddonfield on Halloween night, ready to stab, jab, gouge, pummel and kill anything in his path.

With Laurie (and thus the great Jamie Lee Curtis) sidelined in the hospital, “Halloween Kills” shifts its focus to Tommy (Anthony Michael Hall), who was one of the kids Laurie was babysitting on that fateful night in 1978 and meets up with a handful of other survivors in a bar on Halloween night every year to raise a glass to Laurie and to urge the locals to never forget, or something like that. Another subplot involves a couple named Big John and Little John (Scott MacArthur and Michael McDonald, respectively) and get this: They’ve moved into Michael’s childhood home and tastefully renovated the place from top to bottom. On Halloween night, Big John and Little John break out the charcuterie plate, smoke some weed and watch “Minnie and Moskowitz,” I kid you not, and they’re woefully unprepared when Michael comes a-knockin’ on the back door and then the front door.

As Laurie and other characters deliver heavy-handed speeches about the true nature of evil and how there’s strength in numbers but if the townsfolk aren’t careful, they’ll become as ruthless and savage as Michael himself, the Masked One carves a bloody path through Haddonfield, killing characters who behave as stupidly as the victims in hundreds of other standard-issue slasher movies. Granted, there are some darkly entertaining and strange moments, e.g., when Michael suddenly develops a Hannibal Lecter-like flair for the dramatic, arranging a murdered couple in the same pose they struck for a framed photo on the mantle and dropping the needle on a turntable to play “Can I Have This Dance for the Rest of My Life?” by Anne Murray.

But wait. We’ve just heard from a veteran law enforcement guy who had the chance to kill Michael in 1978 but blew it — and this guy says Michael is a 6-year-old boy with the strength of a man who acts like an animal. How did he suddenly get so sophisticated, with the grotesquely arranged corpse displays and the twisted musical selection?

It’s almost as if “Halloween Kills” is an inconsistent, sloppy mess.

The top entertainment stories, features and must-read reviews, sent to you weekly.