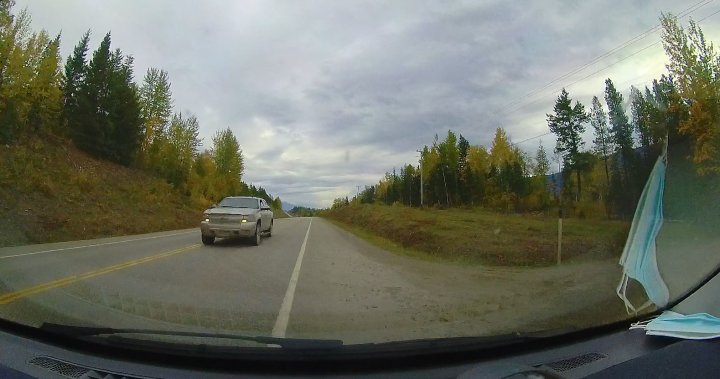 A Lower Mainland resident sent Global News dashcam footage of a close call he had while travelling along Highway 16 in B.C.’s Interior.

The man, who wanted to stay anonymous, said the incident happened in late September while he and his wife were driving east of McBride, when a truck travelling in the opposite direction drifted into their lane.

The man said the incident happened quickly, with both vehicles travelling the speed limit of 100 km/h, but that he honked the horn several times to alert the oncoming westbound driver.

The man said he had two choices in avoiding a collision: drive into the opposite lane or shoulder, or drive onto his shoulder. He chose the latter and prevented a possible head-on collision.

Though the incident happened quickly, the man said he noticed that the other driver’s head was down, along with slouched shoulders,

The man said the honking seemed to help, as the truck corrected its position, albeit after they had passed each other.

The man said he sent the video to Global News as a reminder for other drivers to always pay attention when travelling B.C.’s highways.

0:30
Close call between trucks on B.C. highway caught on dashcam