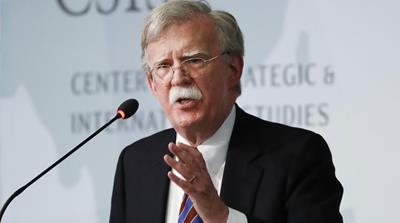 China’s foreign ministry said the sanctioned US citizens showed no regard for the interests of the people of China and the US.

China imposed sanctions on 28 individuals from the United States, including former Secretary of State Mike Pompeo, over “crazy actions that have gravely interfered in China’s internal affairs”.

A statement from China’s foreign ministry came as Joe Biden was being sworn in as the new US president on Wednesday, ending Donald Trump’s reign during which bilateral ties between the two world powers suffered.

The ministry said the sanctioned US citizens, out of their selfish political interests and prejudice and hatred against China showed no regard for the interests of the people of China and the US.

“These individuals and their immediate family members are prohibited from entering the mainland of China, Hong Kong and Macao,” it said. “They, and companies and institutions associated with them, are also restricted from doing business with China.”

Relations between the US and China, the world’s two largest economies, have plunged to their lowest level in decades, with disagreements on issues including Taiwan, Hong Kong, human rights, the coronavirus pandemic, the South China Sea, trade and espionage.

Last year, China put sanctions on 11 US citizens, including legislators from the Republican Party, in response to Washington’s sanctions on Hong Kong and Chinese officials accused of curtailing political freedom in the former British colony.

China’s foreign ministry spokeswoman Hua Chunying called on the new US administration to jointly put bilateral relations back on track.

“The severe damage to China-US relations over the past four years was caused precisely because the Trump administration made fundamental mistakes in its strategic perception of China,” Hua said.

She added that the Trump administration “viewed China as its biggest strategic competitor, or enemy, leading to various means to interfere in China’s internal affairs and every effort to suppress, slander and smear China”.

“I think the new administration should serve the wishes of the people, view China in a rational and objective light, and work with China on the basis of mutual respect, equality and mutual benefit to put China-US relations back on the track of healthy and stable development as soon as possible,” said Hua.