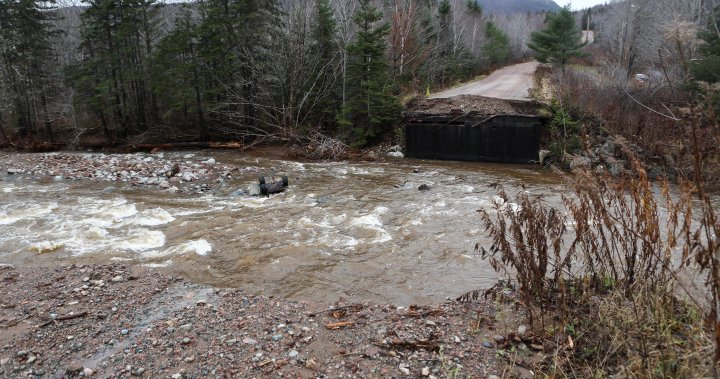 Some areas of Nova Scotia fared better than others during the fall storm that hit the Maritimes earlier this week.

The Ingonish area was hit hard by the storm, which caused caused flooding and washed out roads, and even blocked access to a hospital in the region.

The councillor for the area described the storm as “pretty well the biggest rain event” she could remember.

Further down the list are the Ben Eoin, Millville, the Sydney Airport, and the Northeast Margaree areas, which received 153.8, 144, 126.7 and 119.9 millimetres, respectively.

The only non-Cape Breton place to make the top half of the list was Osborne Head near Cow Bay, which received 125.2 millimetres of rain.

Meanwhile, Kentville was at the bottom of Environment Canada’s list, receiving 67.9 millimetres of rain.

In terms of wind, Cape Breton’s Skyline Trail measured the highest maximum wind gusts in the province at 140 km/h.

The Halifax area also got quite a bit of wind as well, with maximum gusts of 107 km/h registered at both the Kootenay weather station and at the Shearwater jetty. The Halifax airport had maximum wind gusts of 98 km/h.

Not all of Cape Breton was impacted as much by severe winds. In Louisbourg, Environment Canada measured maximum wind gusts of 91 km/h.

Here’s Environment Canada’s list of rainfall by region, in millimetres:

Here’s the list of maximum wind gusts in km/h: