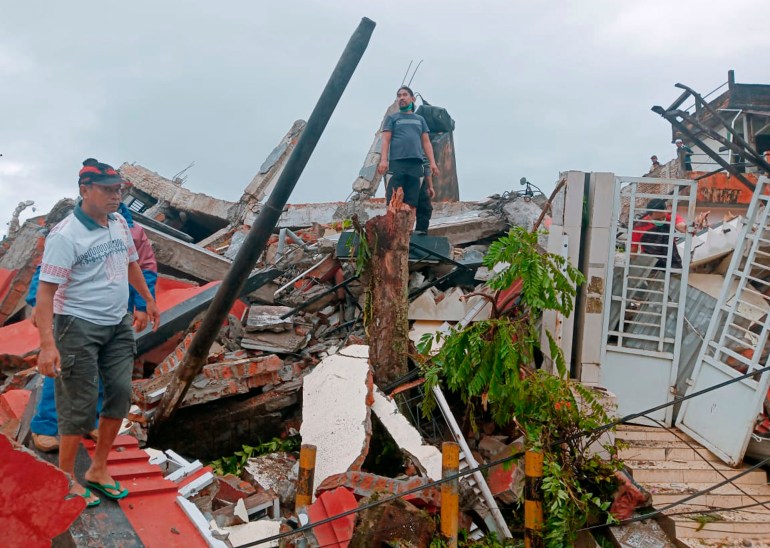 At least seven people killed, dozens trapped in collapsed buildings after a 6.2 magnitude earthquake struck near the city of Majene.

At least seven people have been killed and hundreds injured after a magnitude 6.2 earthquake struck and toppled buildings in Indonesia’s Sulawesi island in the early hours of Friday morning, the country’s disaster mitigation agency said.

The epicentre of the quake was six kilometres (3.73 miles) northeast of the city of Majene, at a depth of 10 kilometres (6.2 miles).

North of Majene, more than a dozen patients and staff are trapped beneath the rubble of a hospital that was flattened by the quake.

“The hospital is flattened – it collapsed,” said Arianto from the rescue agency in Mamuju city, who goes by one name.

“There are patients and hospital employees trapped under the rubble and we’re now trying to reach them,” he told AFP news agency, without giving a specific figure.

Several thousand panicked residents fled their homes to seek safety after the quake, which did not trigger a tsunami warning but was felt strongly for about seven seconds, the statement said.

The disaster mitigation agency said a hotel and the office of the West Sulawesi governor were also severely damaged, and electricity supplies were also down.

Some roads were also damaged slowing down the rescue operation.

A girl trapped in the wreckage of a house in Mamuju, Sulawesi Island, cried out for help and said her mother was alive but unable to move out.

“Please help me, it’s hurt,” the girl told rescuers, who replied that they desperately wanted to help her 😢 https://t.co/HWiF900Ply pic.twitter.com/kizoBubIO4

Straddling the so-called Pacific ‘ring of fire’, Indonesia, an archipelago of high tectonic activity, is regularly hit by earthquakes.

In 2018, a devastating 6.2 magnitude quake and tsunami struck the city of Palu, further north in Sulawesi, killing thousands of people.