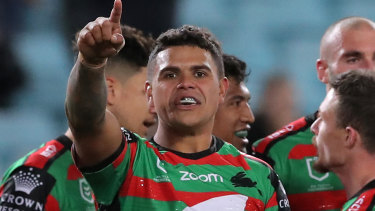 Mitchell’s former agent, Matt Rose, recently handed in his accreditation and colleague Warwick Wright has been entrusted with thrashing out the terms of any future deal.

Given Mitchell’s standing in the game and Souths’ proud Indigenous history, it is hard to see him playing at any other club.

Mundine said Souths should “move heaven and Earth” to nail down Mitchell to a multi-year deal.

“He is one of a kind,” Mundine said. “He is the best player in the game. Look at his size, his speed, his skills – he’s freakish.

“He stands up for what he believes in. He cops it because he’s a proud black man. It’s like when I was playing footy and fighting any injustice. He’s got an old head on young shoulders. I’m so happy and proud of his resilience.

“The kid is worth $1 million-plus a year. If Daly Cherry-Evans gets $1.25 million a year – he’s a great player, but he’s more of a general. As far as strike players, they don’t come better than Latrell.”

There is a lot of excitement brewing about Souths and coach Wayne Bennett delivering a premiership in 2021 before the veteran coach rides off into the sunset.

Mundine, whose son CJ is in the South Sydney system, backed Melbourne to go back-to-back with a top-four finish for the Rabbits.

South Sydney boss Blake Solly would not comment on Mitchell’s negotiations, but confirmed the 23-year-old will line up in the All Stars game, despite being forced out towards the end of last season with a serious hamstring injury.

“We are 100 per cent behind the All Stars game. We know what it means to the players and their community … it’s a game we should be very proud of.”

Bennett stuck solid with the Mitchell fullback experiment at the start of last year and the two-time premiership-winning former Rooster repaid the faith by completing one of the game’s best spines with Damien Cook, Cody Walker and Adam Reynolds.

Mitchell has never been afraid to voice his opinions and call out the haters on his social media platforms. Late this week he applauded Sydney Sixers’ proud Indigenous all-rounder Dan Christian for taking aim at Prime Minister Scott Morrison after he had dismissed Cricket Australia’s recommendation to dump the term “Australia Day” from all Big Bash promotions.