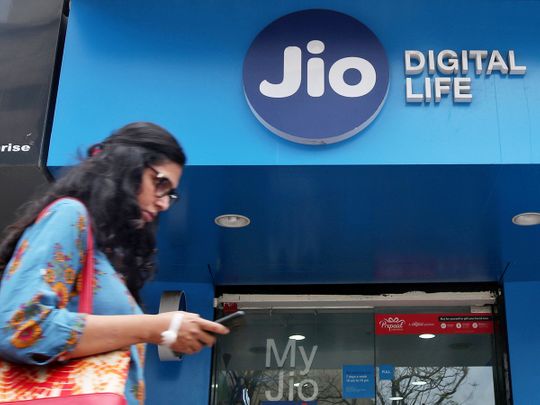 Mumbai:  Indian billionaire Mukesh Ambani doubled down on his promise to offer 5G services on his wireless network as early as this year, as his conglomerate Reliance Industries Ltd. reported a record profit aided by its consumer businesses.

The group’s wireless operator, Reliance Jio Infocomm Ltd. – India’s largest – has started advance tests to prepare the fifth-generation, high-speed network, it said in a statement Friday. But the tycoon’s plans hinge on the availability of spectrum as the Indian government still hasn’t auctioned the required airwaves.

The Mumbai-based group, whose businesses span oil refining and petrochemicals to retail and telecommunications, said it’s testing the transmission speeds using locally-developed equipment. Reliance Jio, with almost 411 million users, reported a 15.5 per cent jump in profit for the three months through December from the preceding quarter, while earnings margins before interest, taxes, depreciation and amortization touched 47 per cent. Net income at the group rose 13 per cent from a year earlier, beating analyst estimates.

The latest quarterly results bolster Ambani’s ambitions to transform Reliance from an energy giant into a technology titan – a pivot that has received $27 billion from global investors including Facebook Inc. and Google. Ambani, Asia’s second-richest man, promised last month that Jio will be the first to roll out 5G in India in the second half of this year. He’s looking to lure nearly 300 million users still on the older 2G technology offered by Jio’s rivals.

“Jio will continue to accelerate the roll out of its digital platforms and indigenously developed next generation 5G stack and make it affordable and available everywhere,” Ambani, Reliance’s chairman, said in the statement. “Jio is determined to make India 2G-mukt,” or 2G-free, he said.

The 63-year-old tycoon’s 5G plans, however, are contingent on the Indian government’s auction of airwaves specifically allotted for these services. No date has been announced for this spectrum auction.

Jio, backed by its cash-rich and net-debt-free parent, is in the pole position to offer 5G services, whenever government rules allow, at possibly dirt-cheap prices, in what may be an encore of its debut strategy. Reliance Jio disrupted India’s telecom market in 2016 when it entered with free calls and super cheap data, forcing rivals to merge, quit or go bankrupt.

Ambani’s bet on consumer services – telecom and retail – seems to be paying off despite the pandemic, helping the conglomerate offset a slump in its crude oil refining business