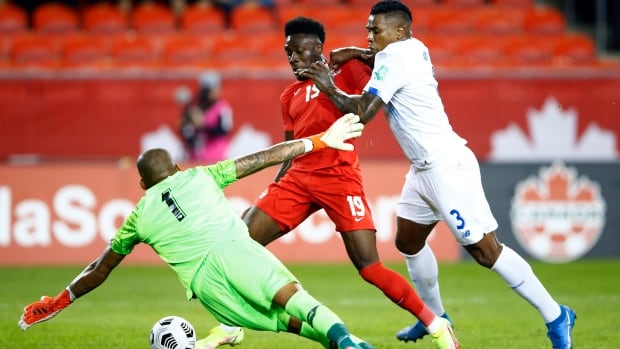 On a big stage before a big crowd, Canada’s marquee man delivered. And how.

Alphonso Davies scored a remarkable goal to open the floodgates midway through the second half Wednesday as Canada roared to a 4-1 victory over Panama in CONCACAF World Cup qualifying play.

The goal epitomized the 20-year-old Bayern Munich star, showcasing his speed, acceleration and flair. Not many people on the planet could have scored it.

It got Drake’s attention. Canada coach John Herdman said the global hip-hop star texted Davies after the game, saying he wanted to get together.

The 51st-ranked Canadian men had No. 68 Panama under the cosh but didn’t pull ahead until the 66th minute when a sprinting Davies came out of nowhere down the right flank to pilfer the ball from under the feet of defender Harold Cummings, who thought the ball was about to go out.

Davies got to the ball before it did, acrobatically using his trailing foot to keep the ball in play and push it ahead of him, then danced around defender Fidel Escobar and — using Jonathan David as a decoy — fired a low shot that left goalkeeper Luis Mejia rooted to the spot for a 2-1 lead. It was Davies’s 10th goal in his 28th match for Canada.

The Canadians, still unbeaten at 2-0-4, turned on the offence after the goal.

“Phonzie’s a big infuencer in this group. He’s a humble guy but when he speaks, it reminds us of [Christine] Sinclair. When he speaks, people listen,” said Herdman, who coached Sinclair and the Canadian women before taking over the men’s program.

Tajon Buchanan made it 3-1 in the 71st, heading home a Richie Laryea cross for his third goal for Canada. David then scored in the 78th minute, slotting the ball home on a counter-attack off a feed from Davies with the Panama defence in disarray. It was the 17th goal in 22 internationals for the Lille striker.

Davies left in the 81st minute to a standing ovation. A Panama goal in the 85th was waved off for offside.

BMO Field was at full capacity, with announced attendance of 26,622 after local authorities eased pandemic-related restrictions. The south stand was a sea of red, filled with waving flags.

They got to see a full-blooded game played at breakneck pace. A rampant Canada dictated almost all of the tempo with Davies, playing up front with David, directing the attack. Davies was electric, tormenting defenders.

While Panama (2-2-2) was hanging on by a thread through much of the match, the visitors opened the scoring.

After falling behind to a Rolando Blackburn goal in the fifth minute, Canada regrouped and attacked with verve. The veteran Panama side showed its composure and resolve in withstanding the onslaught but the Canadians kept coming and tied it up in the 28th minute on a Michael Murillo own goal.

The benches emptied near the stroke of halftime after a melee as Panama delayed taking a corner. The Canadian substitutes were warming up in the vicinity and took umbrage at Panama’s tactics, leading to a scrum that eventually dissipated after some shoving and yelling.

WATCH | Tempers flare as benches clear before halftime of qualifier:

Things get heated late in the first half of the CONCACAF World Cup qualifying match between Canada and Panama. 1:56

There was more bad blood after the final whistle with players having to be separated. Laryea, whose blood is no stranger to boiling, was irate at something.

“This is life or death for us,” said Herdman. “We will fight. We will fight right to the bitter end for this country. Our purpose is bigger and stronger than any other team in CONCACAF. We haven’t been to a World Cup since 1986. These teams have. So when you’re trying to take that away from us, we’re getting in there — everyone.

“It’s not nice to see and I don’t condone what goes on,” he added. “But at the same time our country needs us to fight. We cannot back down at any moment now.”

The Canadians have now taken seven of a possible nine points at home. And they’ve done the job on the road, picking up points through draws in the U.S., Mexico and Jamaica.

Herdman got what he wanted — a dominant home performance.

“That was as good or as strong a performance as I’ve experienced or been a part of,” he said.

Canada’s next two matches are also at home, against Costa Rica on Nov. 12 and Mexico on Nov. 16, both at Edmonton’s Commonwealth Stadium.

Wednesday’s game was the third of an international window that saw the Canadians draw 1-1 in Mexico and 0-0 in Jamaica.

Come March, the top three teams in the eight-team CONCACAF round-robin book their tickets to Qatar 2022. The fourth-place team will take part in an intercontinental playoff to see who joins them.

World Cup Qualifying: What to expect from Canada vs. Panama

The Canadian men’s national soccer team is preparing to host their final October World Cup qualifying match against Panama. Panama comes into this match after defeating the United States for the first time in its World Cup Qualifying history, CBC Sports’ Signa Butler speaks with Panamanian soccer journalist David Sakata for a breakdown of CanMNT’s next matchup. 5:49